After nearly two years the BATAVI are back at a public event!  After doing last year's event as part of an online series of short pieces on late Roman life, we are able to do our next event in person. Of course, there will be some restrictions due to the current Covid regulations but we will be able to do most of our normal displays.

As part of the Leicestershire Festival of Archaeology we will be 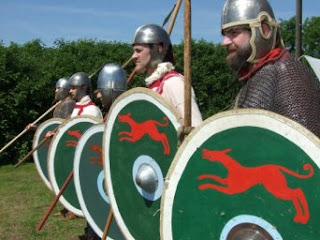 Long before the Battle of Bosworth took place, the site housed an important Roman Temple.

The Batavi Re-enactment group will be camped on site and covering a whole manner of everyday roman life experiences from home and family life aspects such as cooking and pottery to exploring the life and attire of a Roman soldier.

What’s more Boudicca, leader of the Iceni Tribe will be there to tell her story, she’s not a fan of the Romans though, so there maybe some trouble!

More information include prices can be found on the Leicestershire Festival of Archaeology website.

Posted by Nick Marshall at 02:44 No comments:

Sadly, the great parade in Rome has been cancelled this years due to coronavirus so we have to commemorate the date in other ways 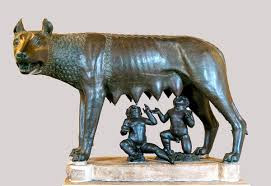 The official statue of Romulus & Remus.

So Happy Birthday to the Eternal City! 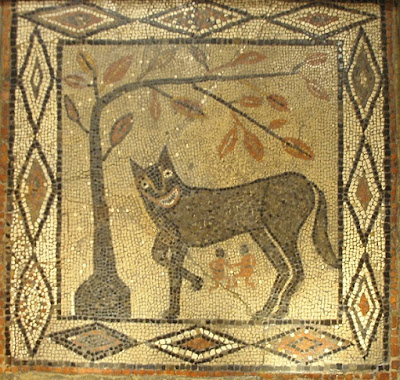 The less-official version but much cooler Romano-British version on display
in the Leeds city museum.

Posted by Nick Marshall at 00:41 No comments:

Discover the Romans at Bosworth Battlefield 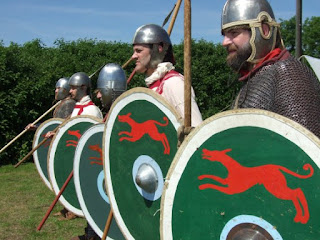 The BATAVI will be taking part in the Bosworth Battlefield Centre's first Roman event!

Whilst hunting for the Medieval battle site, metal detectorists came across  a large number of Roman brooches and other finds. These dated mainly from the 2nd to early 5th centuries AD. This lead to the discovery of a Temple, probably to Mars, on the site. This event is the first to promote the Roman aspects of the area.

The BATAVI will have a small camp with displays on late Roman military & civilian life and our famed food & cookery display.

There will be a presentation on the equipment of the Roman soldier covering the 2nd century, the 3rd century & the 4th/5th centuries, showing how the army & its role developed of the Roman period. 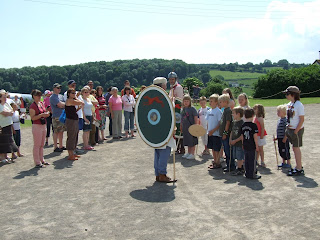 New recruits of all ages can learn Roman Drill & some Celtic supporters of Boudicca will be stirring up trouble!

There will also be talks on Roman religion, temples & religious sites in Leicestershire, the possible site of Boudicca's defeat and the latest finds from Roman Leicester. 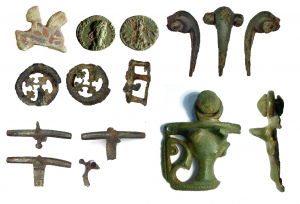 Items, especially the "horse & rider brooches" found at the local temple site can also be seen in a small exhibition.

The official webpage for the event can be found here

Posted by Nick Marshall at 04:36 No comments: 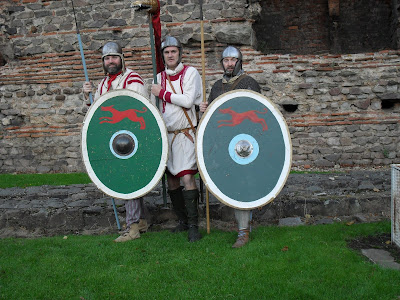 The BATAVI and other Roman groups will be taking part in the Friends of Jewry Wall Museum Roman event
to be held at Saint Nicholas’ church
and the grounds of the Jewry Wall museum
in the heart of Roman Leicester..

The Jewry Wall museum, itself, is currently closed for a major
refurbishment but their Friends group have continued a series of
events to keep the museum in the public mind.

See you there!
Posted by Nick Marshall at 07:13 No comments: 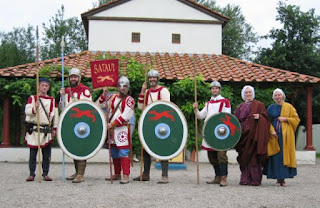 The BATAVI are a small, friendly group who re-enact military and civilian life in the 4th to 6th centuries A.D.
Our military activities are based around a late Roman army unit, the Batavi Iuniores Britanniciani, which may have been formed in Britain in around 367 A.D. They then moved to join part of the mobile Gallic field army and are last recorded in central Gaul in the 420s A.D.

We also have a small late Roman Navy section, the Classis Sabrinae, and a civilian wing which displays everyday life, crafts and cookery from the period.
We have currently members in the Midlands and South of the UK.
Posted by Nick Marshall at 10:10 No comments: